Many houses are positioned on the site like this one; with the front door facing the road, a driveway along the side of the house, and a path leading diagonally from the drive to the front door. Whilst the latter may be the most practical and direct route to the front door, it does not relate to the shape of the house and disconnects the house from the front yard. Removing the original path and replacing it with one that consists of a series of connected L-shapes, is one solution. Another, less invasive option is to use planting design as a tool to link the house with its surroundings and with the existing path. The brief for the photographed property is to soften the house with planting. The owner is considering to line the existing path to the front door with box hedging, and to include standard roses elsewhere in the planting.

Lining the path with a hedge will reinforce the diagonal line to the front door, and as such further reduce linkage between the house and its surroundings. In general, if the layout of your site includes any strong lines that are not parallel nor perpendicular to the house (i.e. that don't relate to the dominant house lines), it is best not to reinforce these lines. Instead, try to repeat house lines in the planting and the rest of the garden.

With shapes (instead of lines) it is a little bit different. A patio or deck positioned at a certain angle to the house can be used as the driving force for a design that links the house with a garden in which some or all spaces or garden beds repeat that same angle. 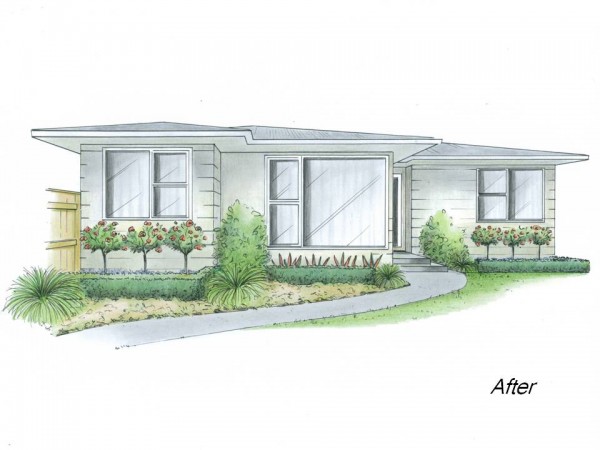 Instead of lining the path with a box hedge, the planting beds can be designed so that they echo the shape or lines of the house. In this drawing, box hedges and rows of standard roses are planted parallel to the house walls.

The roses can be under-planted with catnip, rosemary, or other plants that grow just a bit taller than the hedge.

In the foreground, a simple ground cover, Coprosma acerosa (sand coprosma) keeps the focus on the lines of the hedges and away from the angle of the footpath.

Plants with contrasting grass-like foliage such as Lomandra 'Tanika' or Chionochloa flavicans are included to avoid over-simplification of the scene. They are positioned so that they, together with the surrounding planting, establish a rhythm in the direction of the front door. As such they form the link between the lines created by the box hedges and those of the path.

The remainder of the suggested planting scheme includes taller growing evergreens like Griselinia littoralis (kapuka, broadleaf) or Camellia against the wall, and colourful flaxes behind the hedge in front of the large window.