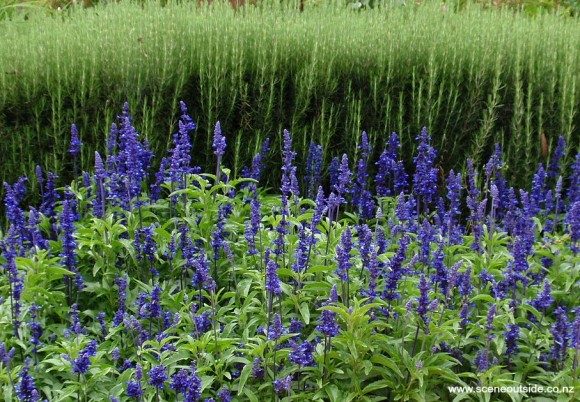 Herbaceous perennial, native to Mexico and parts of the USA, flowering profusely during summer and autumn. Erect, four-angled stems. Ovate to lance-shaped, mid to grey green leaves with entire or lobed margins. Two-lipped, five-lobed, blue flowers tightly packed in spikes. The common name refers to the powdery white felt on the stems and the calyx of the flowers. Attracts butterflies and hummingbirds. Several cultivars available in shades of blue, purple, and white.

Prefers a position in full sun or part shade and any well-drained soil. Tolerates poor soils. Indoors it likes good light, but some protection from full sun during the hottest part of the day. Reasonably drought tolerant. May become leggy in wet soils. Cut back after flowering. Tolerates light frosts, and is often grown as an annual in cooler climates. Generally trouble-free, but is susceptible to downy and powdery mildew.

Salvia farinacea looks spectacular when planted in groups against a contrasting background. You can create striking colour combinations with yellow or orange flowering plants, or a more traditional look with pinks and whites. Taller cultivars are suitable for cutting and can also be dried.